Agile software development is an umbrella term used to describe a set of methods and practices based on certain values and principles. These values and principles are based on the Agile manifesto which came about as a consequence of industry frustration with software development projects in the 1990s. A lot of projects were being cancelled due to the vast time lag between business requirements and the delivery of the product that answered those needs. The Agile manifesto and its principles birthed a number of frameworks to help teams organise the way in which they build software products.

The most popular being:

This article will focus on XP programming, which will be a review of the book I read: Extreme Programming Explained: Embrace Change by Kent Beck, Cynthia Andres. Software engineer Kent Beck developed XP in 1996 and it has since grown to be one of the most popular agile frameworks.

This is a fundamentally important book on how software should be delivered. In this book Kent focuses on values, principles, and practices of XP programming. His values and principles are centred around recognising the humanity of the programmer and reminds us that software is written by people and XP brings back humanity to those who practice it. This is through recognising that these engineers/developers have an agency over their work and the processes they are involved in. Principles act like a bridge, connecting values and practices, without the XP principles you wouldn’t know how to apply your values to practice.

Agile methodologies may evolve with time, but the practices being adopted will lie on a firm foundation of the values that Kent described, namely:

Practices by themselves are meaningless unless given a purpose by values. The practices he states are situation dependent, and thus should be applied by teams as they see fit. The intention is to provide you with clear goals and give practical guidelines on how to get there. Some of my key takeaways from the practices he recommends are the following: 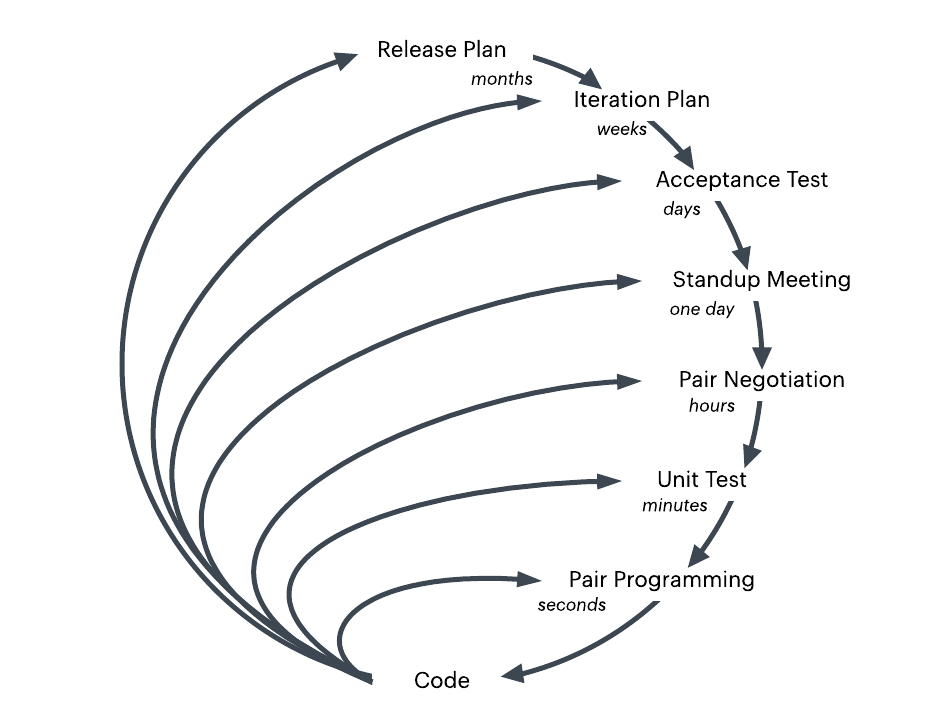 What I liked the most

I agree strongly with most of his principles and practices, such as the fact that software development is ultimately about constant change, that communication is a crucial part to the whole process. Effective communication ensures that everyone has context and everyone’s voice is heard. When the different team members i.e. Testers, architects, project managers, technical writers and engineers are walking abreast, they make more progress than if any group tried to be more dominant so others follow. He also emphasises the need for teams to change their approach to work and strive to embrace change instead of trying to predict everything in detail or trying to predict what is not predictable so as to avoid unnecessary frustrations.

What I like most about the book is that it levels out the landscape, instead of being lost in the system of hierarchies and bureaucracies, XP brings responsibility to everyone in the team. One profound point he highlights is that a career in software should be one of continual development of one’s skill and not race towards being at the top. He touches on shared responsibility, lean production techniques and continual improvement as ways of being successful in the software business. In addition this practice ensures that teams take on a portion of work they can finish in time whilst working at a sustainable pace. The likely results from following these practices are: substantially reduced software defects, improved code quality, a motivated team, reduced development time and a productive team.

What I liked the least

My one concern with his book is that there are moments where he lacks concrete practical examples when he writes on some concepts such as design. I felt the ideas he tried to present were quite high-level and vague and I had a difficult time trying to translate or relate them to real projects I work on and how they can be applied. There are moments where he also seems to be very opinionated on certain issues, somehow suggestive of his certainty that certain methods will never work in any type of team.

Overall, this is a great book that has had a huge impact in the software development industry. This can be seen through a number of teams that have adopted its practices such as Test Driven Development, refactoring, pair programming, Continuous Integration (CI), Continuous Deployment (CD) which have become common terms too. I would recommend anyone who works in the software engineering space find time to read this amazing book.